"Everyone on the Spirit of the Wild Programme is treated equally and there is no skin colour here. It has really helped to heal me and to know I can hold my own in this world."
Jeffrey Mabasa, Tracker Academy graduate

In line with our objective to develop and support experiential environmental learning, Bergplaas Nature Reserve and the Spirit of the Wild Certificate Programme partner a range of conservation organisations and initiatives.

In 2016 Bergplaas established formal partnerships with:

Established in 2001, the SA College for Tourism is based in Graaff-Reinet in the Great Karoo. It is chaired by Gaynor Rupert and operates under the auspices of the Peace Parks Foundation. It offers a one-year tourism and hospitality certificate course to disadvantaged, unemployed young women and the one-year Tracker Academy certificate course.

Established in 2010, the Tracker Academy is a training division of the SA College for Tourism, and it operates under the auspices of the Peace Parks Foundation. The Tracker Academy is a nonprofit organisation that trains disadvantaged, unemployed young men in the traditional skills of tracking. More than 94% of Tracker Academy graduates are permanently employed in the nature-based tourism industry of South Africa.

In addition to the short courses and internships for NMU Nature Conservation Students discussed under Programmes, as part of the formal partnership between Bergplaas and NMU, the following has been established from 2016:

A partnership has been established between Bergplaas and NMU’s School of Natural Resource Management, which includes its Nature Conservation Programme. The rationale for this partnership is:

In support of such a partnership:

Bergplaas is available to Honours, Master’s, PhD students, as well as Postdoctoral candidates, to pursue a wide range of research opportunities on the reserve. Students and Postdoctoral candidates are accommodated on Bergplaas for the duration of their research, and assisted by the third-year NMU Nature Conservation student intern who has the option of linking their research project to the postgraduate research. 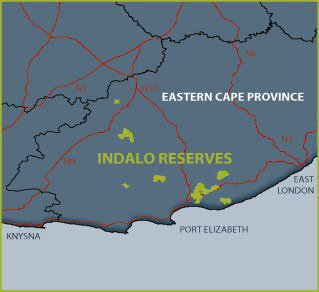 In September 2016 Bergplaas Nature Reserve became a member of Indalo, a group of eleven leading private nature reserves/game reserves in the Eastern Cape that are committed to socially and environmentally responsible practices through the biodiversity stewardship programme of the Eastern Cape Parks and Tourism Association (ECPTA).

Indalo was formed in 2002 after the Wilderness Foundation facilitated a series of meetings between the owners and general managers of key reserves in the Eastern Cape, and formalised the association, with a constitution and membership criteria. The Wilderness Foundation contributes a secretariat and advisory function for Indalo today.

The reserves include: Shamwari, Kwandwe, Amakhala, Lalibela, Pumba, Sibuya, Kariega, Oceana, Bergplaas, Hopewell Private Game Reserve and Hopewell Conservation Estate. The reserves collectively cover over 100 000 hectares, ranging from wetlands to sub-tropical thicket, fynbos and Karoo escarpment grasslands. A biodiversity assessment had been done on all the reserves, which include several critical biodiversity areas.

“The aim of Indalo is for likeminded reserves to discuss conservation and social issues, learn from each other and agree on standards and processes that advance Indalo’s reputation as a socially conscious wildlife group that sets the standard in responsible conservation tourism and commitment to advancing our rural communities,” says Dr John O’Brien, the Chairperson of Indalo and the Group Ecologist for the Shamwari Group. He has a Master’s degree in terrestrial ecology and a PhD in integrated predator ecology.

Indalo reserves are non-hunting, and focus on photographic safaris, for which many tourists have a preference. Indalo has completed a conservation plan for all the member reserves, and it will be developing a responsible tourism model for conservation.

Since 2004 Indalo has commissioned four socio-economic reports undertaken by leading researchers at two Eastern Cape universities, namely the Centre for African Conservation Ecology at Nelson Mandela Metropolitan University, and the Department of Economics and Economic History at Rhodes University. A key focus of the reports is the employment and career advancement opportunities that member reserves contribute to their communities and to the Eastern Cape province.

The reports concur that as a land-use, eco-tourism-based game farming, as practised by the Indalo members, is an economically and ecologically desirable alternative to other land uses in their region, including mohair and dairy farming. It generates more income per unit area, and creates more jobs that are better paid.

Through the preferential recruitment and training of local people, social upliftment and poverty alleviation is achieved by raising literacy and numeracy levels, and providing skills to previously unskilled individuals. Private nature/game reserves also benefit the regional tourism sector by diversifying the tourism product in the Eastern Cape, thereby encouraging tourists from the Garden Route to stay in the area longer, to the benefit of the local economy.

“Landowners in South Africa have a very important role to play in the upliftment of the rural areas, the provinces where they are situated and ultimately the national economy,” says Dr O’Brien. Indalo reserves focus on job advancement, environmental education and skills development programmes.

“One of the biggest problems in South Africa is rural unemployment. Collectively our reserves employ thousands of people, most are from the communities in our areas, and we offer skills advancement for our staff, including qualifications with the Field Guide Association of Southern Africa (FGASA). All Indalo reserves are members of FGASA.”

Bergplaas has focused on environmental skills development for the past ten years through its unique Spirit of the Wild Programme and through the internships and training it provides to students from the School of Natural Resource Management at Nelson Mandela Metropolitan University (NMMU), the South African College for Tourism and the Tracker Academy.

Bergplaas’ Spirit of the Wild Programme is endorse by FGASA as a Specialist Training Provider and Certificate Programme.
The diverse range of participants includes:

“My first visit to Bergplaas in 2013 was a stepping stone that enabled me to better understand the role of the natural environment in our lives and life in general. My ongoing engagement with Bergplaas has allowed me to see the wild, natural world in a whole new dimension, and this has enriched my capacity as a professional to understand value and to better grasp the major sustainability challenges we face and how to tackle them more effectively.”- Guillaume Taylor, Managing Partner of Quadia and Trustee of Bergplaas Private Nature Reserve.